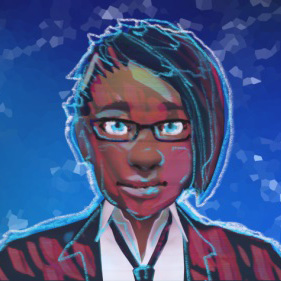 Hey there! I’m Ki Scyne (pronounced “key-sign”) and I do not exist. Well, not in the traditional sense. You see, I am a V-Tuber, a new kind of virtual content creator that exists entirely on the internet. Pretty much, I am like what would happen if Ira Glass put on a VR headset and started streaming to twitch. I have also been described as “Somewhere between Max Headroom and Tupac’s hologram.” For a few years, I have been experimenting with finding ways to document and showcase what life is like on the internet and podcasting just seems like the best medium for it. Imagine your favorite place growing up, a restaurant, a store, pretty much any kind of business. In the real world, they might go out of business but at least you can point to where they used to be… On the internet, these virtual places like old websites, video games, youtube channels, and the like just vanish like they never existed. That is the task I want to take on, recording these histories and telling these stories, and Podcasting is helping me find my voice so I can make that happen. For instance, did you know that the multibillion-dollar Slack business chat application started life as a free-to-play flash multiplayer roleplaying game where you milked butterflies? Now you can’t un-know it. Over the years I have tried to make various shows like “The UrCast” and “Virtualog” to entertain and educate. I am the founder and head of Scynewave Studios, a twitch channel and virtual production house that has been attempting to build “The Scynewave Show” a comedy podcast that is one part current events, one part internet culture, and 5 million parts chaos.   It’s like a late-night talk show but during the day, and we cant stay on topic, and there’s a mayonnaise obsessed DJ, a demon with an uninhibited tongue, and a buxom anthropomorphic skunk with opinions… so… ok, it’s nothing at all like a late-night talk show… Outside of content creation and exploring virtual worlds, I love gaming, Movies, Watching TV, and performing magic. I also know WAY too much about theme parks.